I’ve been perusing this here website and I was noticing that lately the posts have been very techy and percentage filled. Never fear ye non-techies! I am here to save this blog from becoming over geek-ti-fied.

(and besides, I have this neat story that I wanted to post about anyway. And it is decidedly non-technological)

This week, during their “end of the fiscal year” pledge drive, ***WGBH (PBS 2 Boston)|http://www.wgbh.org*** has been playing a documentary about this amazing guy, Richard Proenneke. In 1968 Mr. Proenneke built himself a cabin in Alaska and continued to live there for the next 30 years…Alone. ***Here|http://www.minifarmhomestead.com/outdoors/richardproenneke.htm*** is a good little site to read more about him.

Despite my dependance on technology, I long, deep down in my heart, to be a self-sufficient country girl. I can’t help but be a little jealous of this guy’s skills in surviving in the wilderness. He build his own cabin and outhouse and even had a little refridgerator built into the ground. WOW! I truely admire his patience and persistance for living off the land. And I just can’t imagine living all alone in the middle of nowhere. His insights on nature and living, however are incredibly inspiring.

Amazon has a book based on his journals. I just may have to check it out. Here’s the link: ***One Man’s Wilderness: An Alaskan Odyssey|http://www.amazon.com/exec/obidos/ASIN/0882405136/worldwidewood-20***

I must say, I am very excited to see that only 52.9% of our site visitors are using IE! The rest of our visitors are split fairly evenly between Firefox, Mozilla, and Safari.

After having the new ***iPod|http://www.apple.com/ipod/*** for three days, here’s what I have to say about it:

First, I skipped three generations of iPod when I did this upgrade. So many of the features that are “new” to me are really from one of the previous generations.

I like how the iPod automatically pauses when the headphone jack is unplugged, and unpauses when plugged back in. This makes it easy to take it from the car in to work, and vice versa.

The touch/click wheel is cool. The 1G iPod had an actual scrolling wheel that could come off easily, and did many times in my case.

There’s a ‘music quiz’ game which is kind of fun. It chooses random songs from the iPod, and gives you a short clip from each one. As it’s playing, you have to choose from a list of possible song titles. Fun way to pass the time. There are also three other games – Solitaire, Parachute, and Bricks… also good diversions.

The backlight fades in and out, rather than just snapping on and off. A nice, if pointless and time wasting touch. 🙂

Though the height and width of the device are the same as the first generation, the thickness is significantly less. Check out these comparisons:

I think we have a winner!

Well, I haven’t been much of a fan of ***Friendster|http://www.friendster.com/*** since I first started using it, but now I have a good cause for which to ditch them.

***Jeremy Zawodny|http://jeremy.zawodny.com/*** ***writes that Joyce Park was fired from Friendster|http://jeremy.zawodny.com/blog/archives/002498.html*** because of certain details she posted in her blog. She has made a concerted effort not to blog about anything that isn’t public record, but apparently some of the technical details she posted in her blog were disagreeable to her employer.

Anyway, you can ***read her side of the story|http://troutgirl.com/blog/index.php?/archives/46_Shitcanned.html***, and then ***delete your Friendster account|http://www.friendster.com/cancelaccount.php***, as I have already done.

If you’re looking for another social networking site, might I suggest ***Orkut|http://www.orkut.com/***? If you would like to be an Orkut member, just let me know – I’ll send you an invite. Orkut’s a more featureful service anyway – that is, when they aren’t overloaded. 🙂

At the Apple Expo in Paris, Apple has just announced the all-new iMac G5! 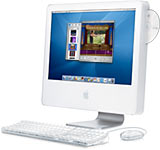 Farnham-san has a much longer writeup with his impressions of the iMac.

I now have six Gmail invitations to give out! If you currently use something like Hotmail, Yahoo! Mail, or some other free email provider, why not give it a try? You might like it. Just let me know if you want one.

Ohhhhh boy. I knew this would happen sooner or later:

For the less-techie crowd, this is basically a way to use your free, one gigabyte Gmail account as though it were a disk inside your own computer. But only on Linux at this point, as far as I can tell.

We’ll see how long it takes before Google tries to shut this guy down.

Hollywood Hits movie theater in Danvers has been changing. In our college years it was the discount theater of choice in the area. Us poor college folk could catch a movie for a couple bucks less than the MEGA THEATER (Loews) across 128 at the mall. Now, however, it has changed. The theaters are still small and somewhat cheap feeling, but the ticket prices have caught up with the major theaters around.

The reason for this ‘upgrade’ can be found on their marquee. It is no longer a “discount theater”…it is now a “premium theater”. That means they play first run movies, charge more…and play your more “artsy” selections.

Thanks to the change we can catch movies that don’t show at the over commercialized, mainstream theaters. Last night, for instance, we went to see ***Napoleon Dynamite|http://www2.foxsearchlight.com/napoleondynamite/***. It was hands down, one of the funniest movies I’ve seen in a long time.

That is, funny if you appreciate very, very dry humor. And very deadpan delivery. And some great cheesy 80’s clothes and music. And moon boots.

I was happy to see child star ***Tina Majorino|http://imdb.com/name/nm0001499/*** making an appearance as Deb. You may recognize her if you saw “Corrina, Corrina” with Whoopie Goldberg, the tear jerker “When a Man Loves a Woman” or (heaven forbid) “Waterworld”.

There are some other familiar faces but I won’t spoil it for you 🙂 So, go and see it. Be prepared to laugh.

The combination of a broken FireWire port, potentially expensive repairs, “old” age (over 2.5 years), diminished storage capacity, and a limited time 0% APR offer on our credit card helped us to decide that it was time to purchase a new Apple iPod.

We bought it at the Rockingham Park Apple Store in beautiful, tax-free New Hampshire. It’s all synced up with the latest tunes, as well as calendar and contact information via iSync.

iPodResQ buys used iPods in any condition, so hopefully we can get a few bucks out of the old one.

Here’s to many more years of on-the-go music!

Last week, the ownership of my employer, Christian Book Distributors, changed hands. The company was sold by its owner, Stephen Hendrickson, to his brother, Ray Hendrickson. Ray has been with the company for just as long as Steve, and I think he’ll do a great job. Obviously, with a new person in charge, there will be changes, but by and large I think Ray will stay true to Steve’s mission. There are sure to be interesting days ahead!

Since CBD is a privately-held company, I waited to post this news on my blog until I was sure that the sale was public knowledge.The Boston Herald ran an article today on the sale, so there you have it!

If you have any comments or feedback on the CBD website, the best thing to do is probably not to talk to me. Rather, please use our feedback page to make sure it goes through the proper channels.

Also, if you are within a day’s drive of Peabody, Massachusetts, plan to come to our Warehouse Sale on Saturday, September 18! It truly is a fascinating experience if you have never attended. People from all over the nation show up – I’ve even heard that some churches in the midwest charter buses and drive out to make a trip of it! Our site has more information on the sale, if you’re curious. I’ll be there for much of the day, of course – almost all CBD employees put in a full day of work on warehouse sale days. So if you are planning on coming, drop me a line beforehand – I’ll be sure to keep an eye out for you!